Ever since reading the description of this route in the Indian Peaks Guide by Gerry Roach I had put it on my to do list.  To avoid any confusion I should note that this route is not on The Devil's Thumb in the Flatirons and is its own little summit just off of the continental divide near the peak of Rollin's Pass.

I called Greg Dooley on Sunday, June 19th 2005 and we agreed to give this route a shot the following Saturday.  Now as it turns out the way to get to the trailhead for Rollin's Pass described in the book requires coming up from Winter Park.  Neither Greg nor myself wanted to add this mileage to a drive and we decided to try the pass from Rollinsville and walk the road past the closure.

Greg arrived at my house at 4:30 Saturday the 25th and we headed out.  We brought along two lengths of 9.5 mm 35 meter rope, some slings, draws, a set of stoppers, and the first 4 tri-cams.  We also included our rock shoes which would turn out very useful.  For anyone interested a few smallish to midsized camalots would nicely round this rack out and in fact, would be overkill.

We made our way up the pass and to right before Yankee Doodle Lake where a guy had stuck himself quite nicely in a snow bank.  We offered help but he seemed cheery and had a friend with him so he declined.  Greg and I set out moving at 6:30 in the morning.

Rather than add several miles of switchbacking up the road we headed straight up towards the top doing a bit of fun scrambling/climbing along the way.  There was a nice huge snowfield to  the left which we avoided up climbing as we didn't bring axes or crampons.

Once up top we found we had bypassed the tunnel and were just a short distance from the two sets of railroad trestles along the way to the Rollin's Pass Trailhead.   There was some steep snow we climbed over along the road and we made it to the trailhead by 7:30.

The trailhead is quite snowed in and we both knew coming back across it was going to stink.  We headed along the trail which mostly skirted the divide and cut off it from time to time to get views from the divide and bypass mud and snowfields.  I have to say it was a remarkably beautiful day.  The flowers were coming up, the temperature was perfect, and we didn't see a single other soul the entire time.

Devil's Thumb itself does not show up until you are almost at it.  The entire time we kept speculating at when we would see it and even though we knew exactly where it was due to a contour map it seemed invisible even when directly stared at.  It wasn't until we were near Devil's Thumb pass that it came into view. 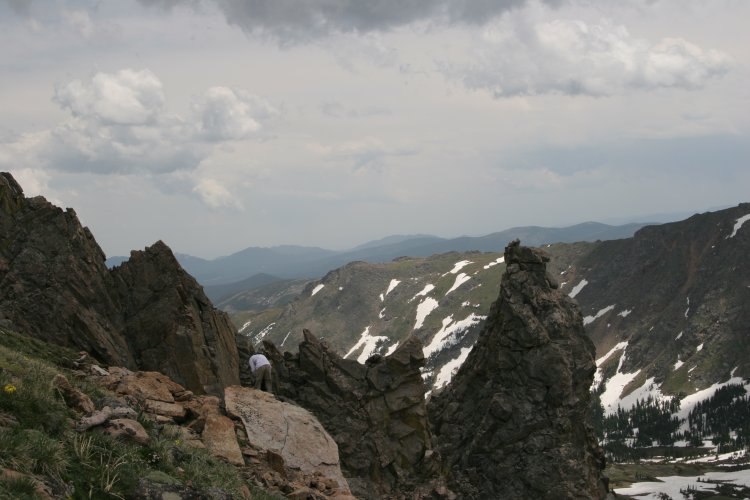 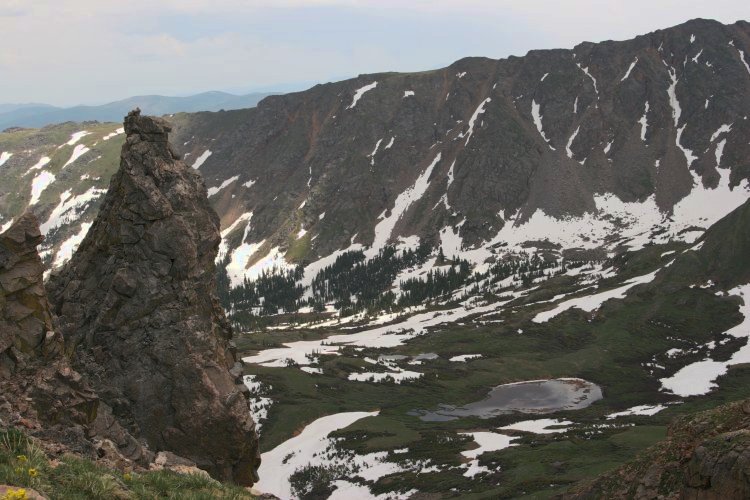 Devil's Thumb (DT from hereafter) is an interesting rock formation which is connected to a downward ridge jutting out from point 12660 and I am not sure how peaks are defined but I'll take it as one.  Greg and I were somewhat lax in following the route description and instead of climbing down and gaining the ridge just above the notch we climbed all the way to the top of the ridge before starting it.  For anyone interested in this route doing the whole ridge is allot harder.  There are numerous 5.0-5.4 down climbing cruxes and the climbing is well tougher than on DT (but a whole lot of fun as well).  One point for people to watch for is if you tend to be like me and are somewhat vertically challenged the down climbing can be a bit tricky as foot placements always seem just a bit to far away.

In any event we started climbing down the ridge at 11:00 (after swapping into rock shoes and helmets) and made our way SLOWLY and carefully down it.  Both of us realized we weren't doing Roach'es route when every move seemed like the crux move.  We basically down climbed either on or just on the east side of the whole ridge finally reaching DT at 11:45.  We decided to forgo roping most of this as we were very comfortable and the climbing seemed to be faster but still safe without a rope.  At the start of DT we grabbed all of our rock gear and left the packs.  Greg started out in front but we soon just picked parallel but different routes up.  The climbing was really easy 5.0-5.2 here and alot of fun with great vertical views all around.

Once we reached the point where it became obvious to spiral  around DT  the exposure increased dramatically.  The final moves to the summit looked easy but we decided the air below us was to big not to rope up for.  Since we were roping up anyways I noticed a semi-roof to a crack that looked like a fun direct finish to the summit.  I wanted to try it but not lead it so Greg agreed to give it a go.  We set a quick anchor just below the move, roped up and Greg was on his way.  He set one tri-cam above him and dissapeared to the summit in a blink.  When it was my turn I pulled the anchor and headed up.  The move was kind of cool.  You had to get up facing the roof,  jam the crack with one hand and do a heck of a mantle to gain the summit, from my brief experience I would put the move at 5.8 and Greg agreed with that and thought it might even be tougher, it sure felt harder than any 5.7's I've done.

Once on the summit we took some time to take pictures, congratulate each other, and generally enjoy the beautiful views and weather.  Roach mentions an anchor being hard to find but this wasn't what we found.  If you have ~ 15-20 feet of webbing (we did) there is a huge rock which can be slung for a rappel in the descent direction.  On this rock we found about 5 previous pieces of webbing through a rappel ring.  Being quite fond of not dying I added webbing of my own to this mess.  I wish we'd brought a knife so we could have removed some of the old webbing but it was down at our packs (that gives me an excuse to drag my wife up this thing). 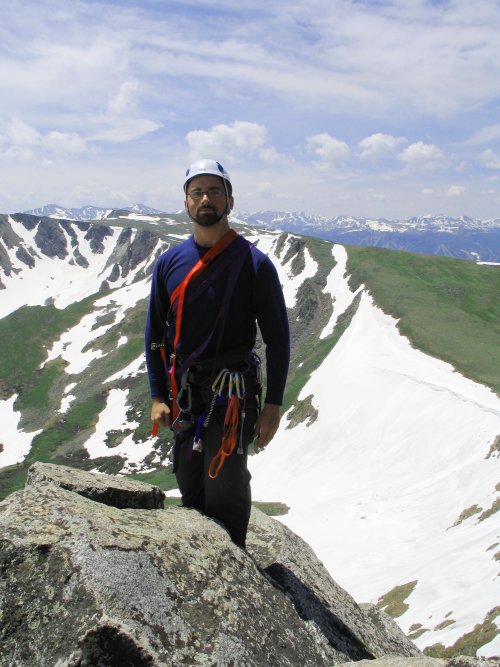 We tied the two 35 meter ropes together and headed down.  For future reference a 60 meter rope would drop you just above the beginning of the climb but on 4th/5.0 class rock which was secure.  At the base we grabbed our packs decided to try to up climb the whole ridge and scrambled up it quickly.  The up climb was great and went quickly, staying right on the ridge is the easiest way and stays at 4th to low/mid 5th class.  Both of us felt comfortable free soloing this as the drops were never more than 10 or 15 feet.  We were back on the trail by 1:30 and started for home.  Both of us were pretty tired and did allot of contouring to avoid snow.  Luckily the snowfield at the trailhead wasn't as badly slushy as we feared and we got back to the top of the pass around 4:00.  Greg used his Leki poles to glissade the snowfield but, as I have never done this, I opted to downclimb.  As it turns out his way was a whole lot faster.  We were both back at his car and moving by 4:30, on the way out we got stuck at a railroad crossing for about 20 minutes or so.  Greg and I had a quick bite at Half Fast Subs in Boulder then he dropped me off and headed off to do a 13er triple the next day.  I think I got the better Sunday though, while he was off in some boring mountains I got to do a thrilling and exciting 8 hours of vacuuming and steam cleaning our carpet.

PS
Sorry I didn't put a summit shot of you up Greg, something weird happened and I cant find the jpg.  If you pick a favorite and send it I'll include it.


Back To Other Mountains Page