My first international trip is just a few weeks away and I am in full on training mode.  I'm not sure how my body will react at altitude but I am doing my best to make sure I am mentally and physically prepared for it.  If I miss out on reaching 21,000 feet in Peru I want to be sure that I at least gave the preparation my all.

Super Star Couloir, located on James Peak in the Indian Peaks Wilderness is one of the routes that caught my eye last year and I figured the mix of steep snow and technical rock would be perfect for my now once per week technical route (another Sawatch Slog is likely to follow this weekend due to poor weather and too much snow in the Elk Range).  Fortunately I had a good partner, Dave Pneuman, lined up for the route.  Dave and I have been knocking out Indian Peak Classic routes left and right this year and I really owe him some long rock climbs to make up for putting him through couloir after couloir.

Dave met me at my house at 4:00 AM, Wednesday morning, June the 7th, 2006 and we headed for Rollinsville and the upper Mammoth Gulch Trailhead. Being the over cautious climber that I am I brought along two ice tools, a full set of Alien cams, 8 shoulder length runners, a 35 meter rope, and an ice axe. Dave brought along a set of nuts and tri-cams to round out the rack.  While this may seem like overkill for a short 5.4 pitch it turned out to serve us well (since we never got to the 5.4 part). 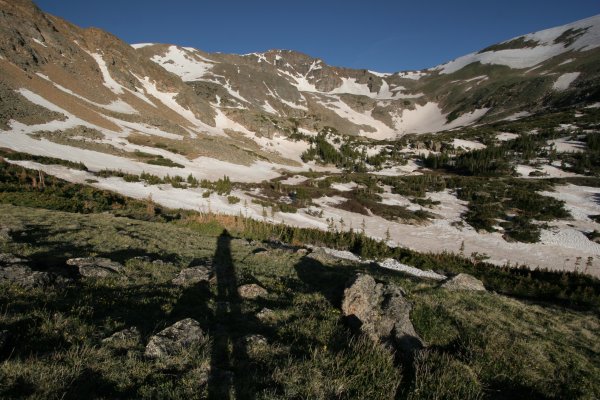 Starting The Day, Super Star Is The Right Leaning Couloir


We found ourselves blocked by snow drifts at 11,000 feet so we parked the truck next to the road and headed for James Peak from there.  The snow on the way was quite disheartening as it had obviously not frozen the night before and we found ourselves postholing quite a bit as we made our way down into the basin below James Peak. 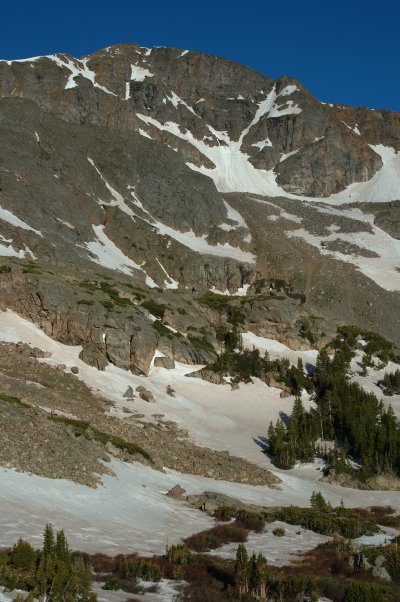 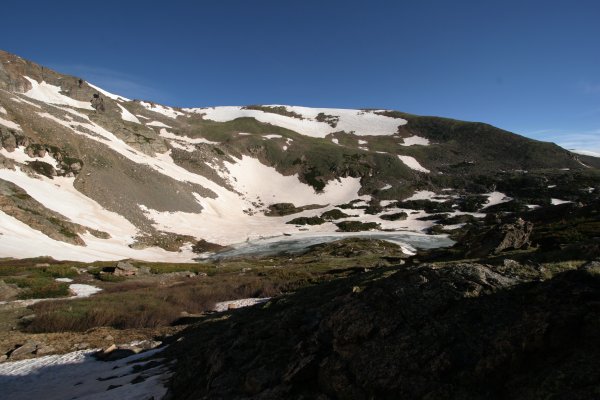 The First Snowfields And The Lake 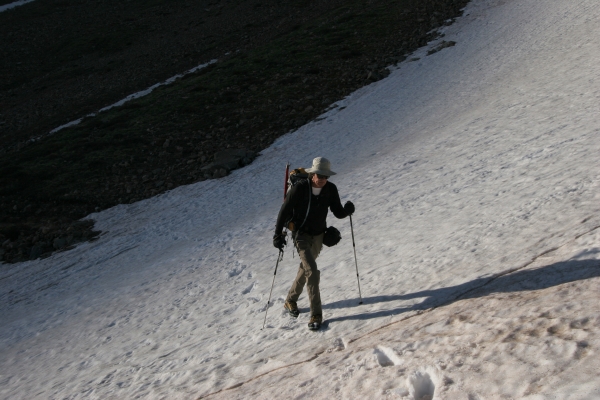 Crossing The Snow Around The Lake


The approach to the peak consisted of crossing a ridge below Kingston Peak, descending a well marked trail towards the lake below James and then contouring around the left side of the lake before gaining the snowfield which ends at the base of the major snowfield leading to Shooting Star and Super Star Couloir. 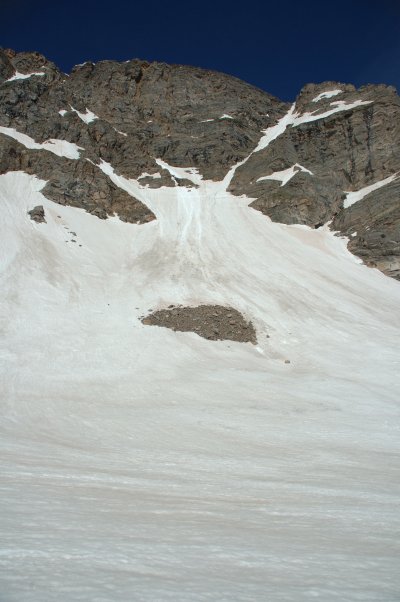 
We started out on the snow leading to Super Star relatively late and were unsure whether or not we would be successful in our summit bid.  We figured we would give it a shot and evaluate conditions as we progressed.  The snow was quite soft and no crampons were required although we wore them.  The snow was slushy enough that much of the climb consisted of kicking in up to the ankles.  This was quite tiring and I was happy when I found the occasional runnel that was solid enough to only require a few inches of kicking in the snow for stability.  The snow seemed to gain in strength as we approached the junction between Shooting Star and Super Star so we decided to turn right and go for it. 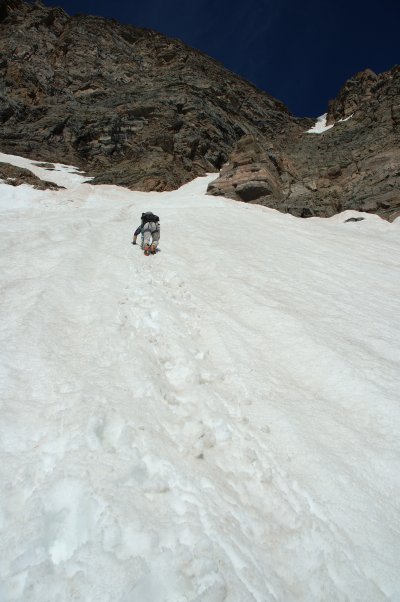 At The Junction Of Shooting Star And Super Star 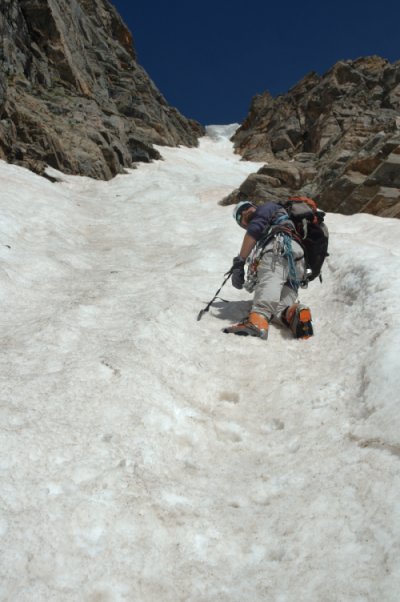 
Once in Super Star, the angle increased from 40ish to 50ish degrees maybe reaching 60 degrees for very brief sections but averaging 50-55 degrees consistently. Unfortunately for us the snow became very slushy again and it was a blessing that we were each  climbing with an axe and a tool as it greatly helped balance.

At the top of Super Star the cornice appeared to have a slight opening on the left but we both agreed that the snow conditions were too poor to try to pull through it and we opted to traverse up and to the right towards a rock wall.  The traverse required we cross several steep runnels on bad snow and the worsening conditions prompted us to move with a decent bit of haste.  It was obvious from below that the easiest rock was farther to the right around the wall.

As we approached the base of the rock we were forced to contour around mini crevasses and at one point climb over a steep and wet melted out section of 4th class rock in crampons.  Past this rock we finally made it to the base of the wall only to discover a huge gap between the snow and the rock.  Given the uncertain depth of this opening and the poor snow coupled with cliffs below we decided that traversing this mini bergschrund might not be the smartest idea.  If it gave we could find ourselves in a deep pit or sliding down slushy snow towards cliffs.

Rather than tempt fate we headed right up to the wall in front of us.  Having had so much fun the prior week on Dream Weaver I decided to head straight up some 5.0/5.2 rock in crampons to a decent ledge.  Since I haven't had the opportunity to thoroughly diminish Dave's IQ he opted for a rope at this point. Once we were both on the ledge I set up a very solid anchor and Dave and I tied in together and switched into rock shoes.  It was during this portion of the trip that I was reminded that over packing rock pro is a good thing.

From our belay point I scouted about for a good route up the rock.  I noticed an obvious thin crack above us which looked to be 5.7/5.8 but I had no pro small enough to fit it and didn't want run it out over a ledge that looked like it would be painful to deck on so I headed up a face to the right.  After starting the face I contoured into an arm/fist sized crack which, due to the pack, required more face climbing.  I'd have to say the climb irritated me because I found myself with run outs of 20 and 40 feet.  At one point I followed a line which lead me to an old rusty piton.  Seeing as how there was no pro between me and a tricky move before the piton I down climbed and skirted to the right.  Just as I was nearing 40 feet of runout and a move into a slot I luckily found a great placement for a red tri-cam followed by a placement for a red Alien.  This was all the confidence I needed to pull through the slot and scramble up onto 4th class slabs to a belay point. I'd say the climbing was  overall 5.5 and 5.6 with a move or two of possibly 5.7.

The belay point offered minimal options so I slung a cordellete over a block that looked decent enough and then set a separate anchor using two side by side Aliens. 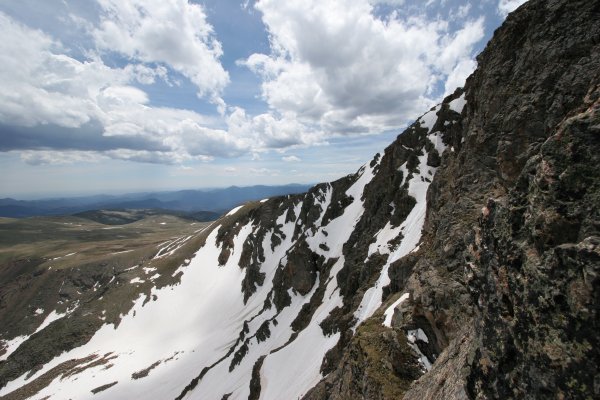 The View From The Belay


The view from the belay was fantastic and I enjoyed it for a moment before calling down to Dave that I was ready for him to come up.  Dave headed up the 90 foot pitch, cleaned it, and pulled through the slot.  Once through the pitch Dave anchored in at which point I left and scrambled 20 feet up 4th class rock and found myself on the grassy ridge leading to the summit. I belayed Dave up to the ridge and we unroped. 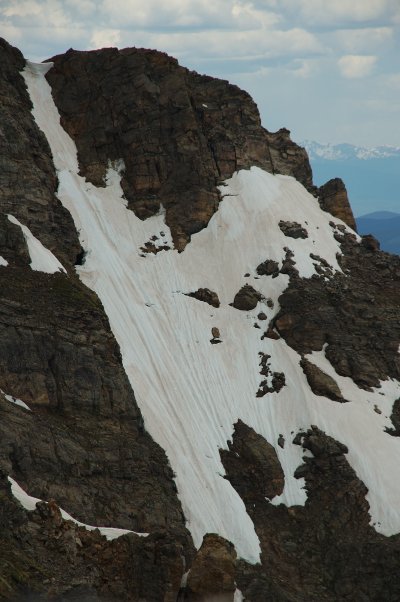 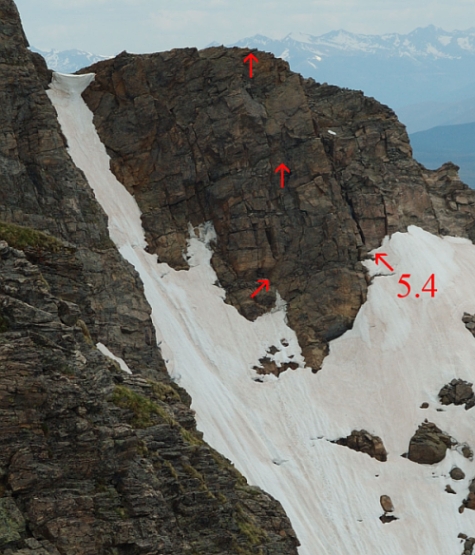 The Route We Took And The Easier Way We Skipped


On the ridge we stopped for a bite to eat, put our gear away and switched back into boots.  We stopped by the cornice and noted it was quite slushy with impossible to protect rock on either side.  I'd recommend not trying to pull it and am certainly glad we didn't..  While the rock on either side looks doable it is quite loose and a fall onto such high angled snow would be difficult to arrest. 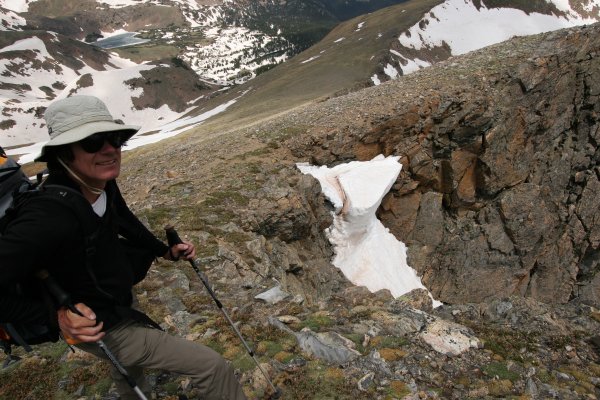 On The Ridge, Just Past The Cornice 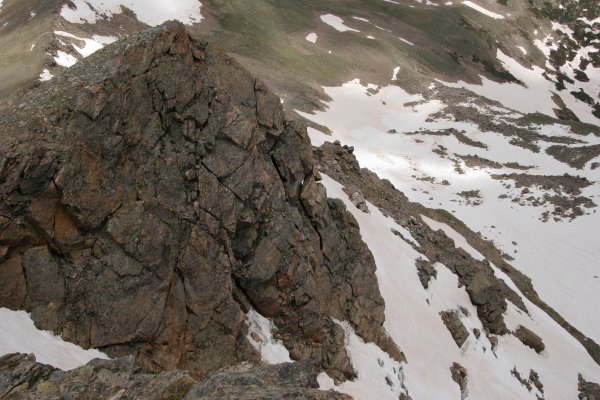 Another Shot Of Our Rock Pitch


We walked up the ridge to the summit making sure to take as many pictures as we could along the way.  I was amazed at how steep Super Star looked and am not sure I would have been so keen on climbing it had I seen it from these vantages earlier on. Oh well, live and get dumber.  I find that is true of life in general.  The older I get and the more I learn the  more I realize I don't know.

The ORIGINAL (all mimics must pay royalties) Obligatory Marmot Shot


After the summit we hurried down as the weather seemed to be taking a turn for the worse.  There were brief outbursts of thunder and lightning in the distance but fortunately all it really did to us was hide the sun which had baked us all day long.


One nice thing about weekday climbs up the non-tourist routes is that you seldom see anyone.  I hear allot of people complain about the crowding on peaks and hear the forest service gestapo use this as justification for restrictions but if you get away from the 14ers there is a great deal of solitude to be had.  Dave and I managed to take a calm and leisurely hike back to the truck without seeing a single soul and were blessed by having the scenery and surrounding all to ourselves (except of course for whoever was shooting a semi-automatic rifle in the basin below).  It was quite relaxing to take the time to take pictures and soak in the surroundings without people about. 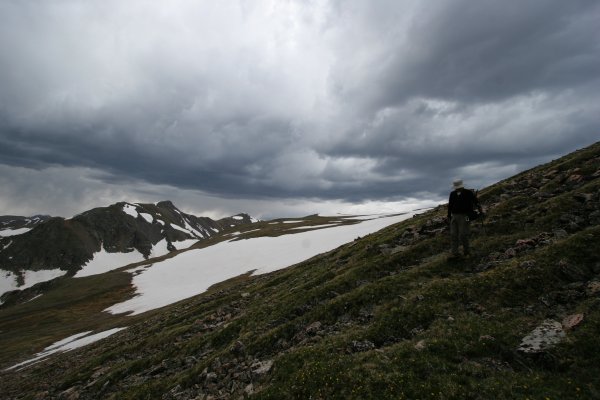 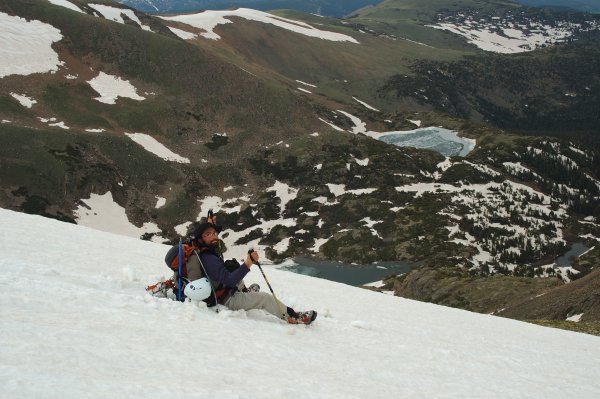 
We made our way back to the truck with a bit of glissading and a bit of solid bushwhacking along the way.  All in all it was another great peak and another great trip.

I think at this point I am comfortable with steep snow and owe Dave some good multi pitch alpine rock routes. I've said it before but it is worth repeating, Dave is a great partner.  One way I tend to gauge a partner is  by my comfort in their holding a rope I am attached to and I don't think twice with Dave, I look forward to several technical rock routes with him this summer.

Back To My Other Mountains Page